We’re a girl society. Girls with pearl earrings or dragon tattoos. Girls on trains and interrupted and gone. Those are really women’s stories. We like to call them girls, but they are women. “Woman” doesn’t ring sexy. “Woman” sounds settled, planted, while “Girl” feels as delicate and reed-like as a cattail. The recent release, Emma Cline’s The Girls, digs into the memory of what it feels like to be watched and young. 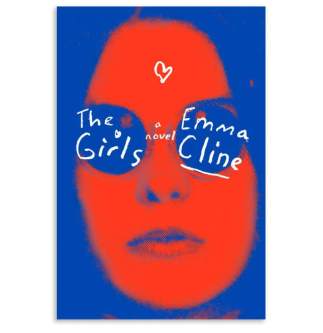 I finished The Girls in a day and a half of on-and-off audiobook listening. Evie, the main character, looks back on her fourteenth year as a time of not so much self-discovery, but discovery of the “other.” Men look at her for the first time, and girls do, too. Suddenly she has the choice to be something other than middle-of-the-road Evie, who, she notes, isn’t smart enough not to be pretty. Evie sees a group of girls in the park one day, girls who everyone else can’t help but notice, and she becomes, refreshingly, not obsessed with “some guy,” but with the essence of one of these girls, Suzanne.

We moved from the Midwest to the East Coast when I was fourteen. Moving when I did would have been disastrous enough, but also being not pretty enough to be a plot point in my new classmate’s lives meant that I was bullied. Not in the physical kind of way, but the sideways kind of way of sitting with someone once and then making sure there were no extra seats at the table the next day. The offhand kind of way, when a girl heard a boy calling me fat in whispered tones and, while she didn’t laugh, didn’t look at me either. A girl asked me if I made cornhusk dolls. A boy asked me if we had movie theaters back home.

The girls I watched when I moved weren’t beautiful or magnetic. They weren’t long-haired and barefooted, but dressed in the uniform skorts we all had to wear. Still, even before the first day had elapsed I saw the fault lines between the popular and unpopular kids. I wasn’t reaching for the unattainable, but for the outer planets of the gym class. I tried to talk to the girls in pairs and trios near the bleachers and crimped my hair and bought new plaid knee socks so that I might look a little like them. I “got sick” nearly once a week, sending myself to the nurse’s office to lay face down on the couch, but the next day I would still have the same emptiness to face. Even trying to chameleon my way into some sort of friend group, I couldn’t help myself when I saw a poster for auditions for A Midsummer Night’s Dream.

Would I go back in time and tell myself not to audition? Share the wisdom that maybe theater, especially a play that your entire school is forced to watch over their recreation period, isn’t going to scrape the social capital you thought it might? I probably wouldn’t even with the events that followed.

Evie falls into a group which parallels Manson’s cult—sex, drugs, and rock and roll, but more than that, Evie takes in the feeling of every judgement, every perceived evaluation of herself. Cline uses the word “gaze” more often that I’ve ever seen in a novel and it’s impossible not to think of Lacan’s vision of the word. When you realize you’re being looked at, you lose your power, yourself. Men look at Evie and define her, but in her head, we feel that definition. Cline writes, “I’d gotten good at determining male expressions of desire… a certain nip in the gaze.” More than the control men have over her, her relationship with Suzanne defines who Evie becomes and becomes a gaze even more important. Near the end of the novel, musing on the disaster that befalls the cult, Cline writes something so inherently similar about Suzanne staring through Evie. “I had told many lies, but this one colonized a bigger silence… Then I’d picture Suzanne, picking at her fingernail, the certain cut of her gaze turning to me…”

I didn’t fall into a cult, but a cast. A few years before, my sister had been Helena in A Midsummer Night’s Dream in Omaha, and I used to watch the video of the performance again and again. I liked Shakespeare’s words and the zany, magical situation. When the cast list went up, I barely had to search for my name. It was near the top of the list and next to it, my character’s name: Bottom.

Bottom. It felt like a joke with a long set up, but I was good at the role. This wiseass, this bumbling fool. I could act this. I memorized the script within days. At rehearsals, I relished in the Rude Mechanicals scenes. It felt like we were pretending to put on a play, and performances felt so distant. As we started blocking the scenes with Titania, the fairy queen, though, I realized that people would see this. People would see me in a donkey head and touching a girl and pretending to be in love.

Titania was not a distant orbit planet, but one closer to the sun. She was blonde and thin and I couldn’t recall her name now without looking in the yearbook. Titania never had bullied me, not even before the cast list went up, but she was cool—both in popularity and the temperamental senses. We never said a word to each other that wasn’t on the script. The understanding between was that both of us, she and I would be on a stage in front of the entire school with my head in her lap at an age when sexuality of any kind was a thing of deleted browser histories and hallway whispers. It wasn’t that I thought I was a lesbian or even cared if anyone else thought I was; it was feeling different in too many ways, trying to cover up too many parts of myself at once.

The day of the performances came and I put on my makeup. Pancake foundation and stubble put on with brown paint and a rough sponge. My closest friend in the cast, Puck, put on his tights and looked at me sympathetically. Photographic evidence would show a grimace on our faces. From the stage, the audience was quieter than it should be for a comedy. I felt watched, gazed at, in a way that made even the bottom of my feet sweat. I got some sympathetic laughs from the school librarian, but the scenes with Titania were awkward, more awkward than in rehearsal. She stroked my donkey ears. I heehawed at her in mock delight. The applause at the end of the show was tepid, and I went home “sick” after I washed my makeup off.

After the show I fell into a depression, the first one of my life. I had lost the structure of play practice every day and was living in the fallout of a post-Bottom world where I got an occasional donkey heehaw at me in the hallways. I went on a long walk around my hilly suburban neighborhood and wondered what it would be like to not exist in the idle way that everyone has at some point. I tried to let the thoughts drift away without tacking them to myself. I didn’t want to think of myself as the kind of girl that thinks about suicide, but I couldn’t help it.

But it passed, and so did the school year. In high school, our class was large enough to get lost in and theater performances were at night, in a dark theater, instead of the sunlit gymnasium.

Now I read books with the word “girl” in the title with a little more skepticism.

I am glad that Evie was allowed to grow up in The Girls, just as I am glad to no longer feel the pressing anxiety of every male and female gaze as strongly as I did when I was fourteen. Growing out of girlhood means breaking the gaze you have with yourself in the mirror as you adjust your lipstick. It means putting down a book at the end of a day and being glad you don’t relate fully to “the girl.”

Buy it on Amazon, Barnes and Noble, Parnassus, or Strand

Add it on Goodreads

Rachel Mans McKenny is a writer and reader living in the Midwest. She is one of the editors of Books that Shook Us and co-founder of The Litsy Feminist Bookclub. This essay was originally published on her blog.

What We Write About